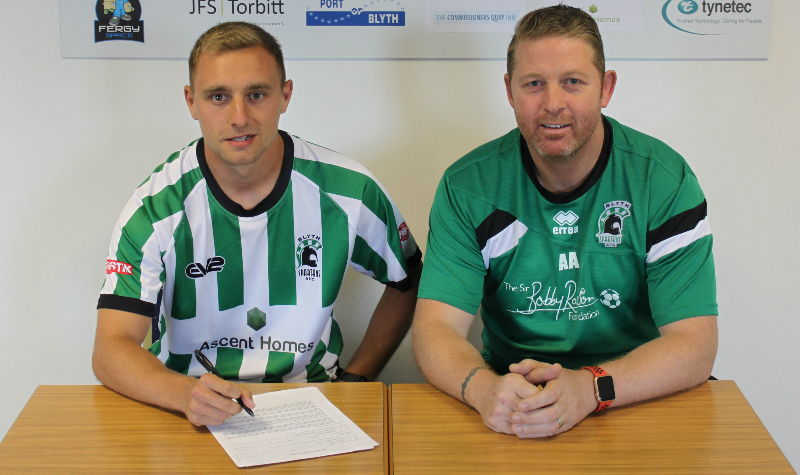 Blyth Spartans have signalled a real statement of intent for next season – after splashing the cash to sign prolific Whitby Town midfielder Dale Hopson.

The 24-year-old – who was third in the Evo-Stik Premier League Top Scorer standings for last season, just behind second-placed Spartans striker Daniel Maguire – had a number of clubs chasing his signature after an impressive season for the Seasiders, but has opted to make the step up into the Vanarama National League North by signing for Blyth for an undisclosed fee.

Having handed in a transfer request at the Turnbull Ground earlier this month, Hopson agreed terms on Saturday morning and then took part in his first pre-season training season for his new club straight away – in a move that proves that Croft Park’s latest addition is eager to get going in his new surroundings.

Hopson revealed: “Obviously, pre-season is already underway [but] I’m looking forward to getting started properly with the games. It’s a big club and a big step up for me from Whitby, so I can’t wait to get started.

“I think – from a playing point of view – when I spoke to Alun, I seemed to get the satisfaction that I needed [to sign for Blyth] from talking to him. I’m glad it’s all done and dusted now really.”

When asked about the amount spent to bring him to the club, Hopson replied: “It doesn’t bring any pressure, I don’t think. I think it’s more flattering than anything, but – like I say – I’m just looking forward to getting going with the games.”

Hopson’s wasn’t the only smiling face around the ground on Saturday morning either – as Spartans manager Alun Armstrong was delighted to finally acquire his target after a busy summer.

The 42-year-old said: “He scored over 30 goals in all competitions last season and he’s someone I was definitely watching. We knew he was dangerous and we haven’t really got a player like that as such.

“It’s cost a lot more than I’d have wanted to pay, to be totally honest, but that’s the current market and it appears to have taken off for some reason. For someone of his ability though, you have to pay to the money. 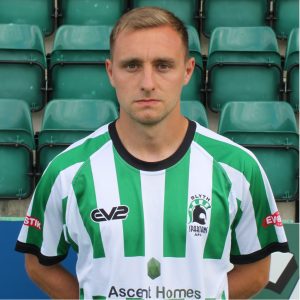 Although he starred for Whitby from the middle of the park last season, Armstrong added that – after seeking the advice of David McTiernan – he saw Hopson’s best position further up the field.

The Blyth boss added: “I’ve obviously spoke to ‘Macca’ [McTiernan] regarding this and his thoughts are that he’s a top player and he’ll fit in the side. He’ll not be like Luke [Armstrong] as such – where he’ll run in behind – but he’ll be a better link-up player, where he’ll be able to get in between the lines.

“We’ll be playing him higher up the pitch, whereas Whitby played him more midfield. We’d be playing him more as a ten, off ‘Nipa’ [Daniel Maguire] and creating opportunities for him that way.

“That’s where I see him; I don’t want to see him do what he did for Whitby and come deep to get the ball – as we’ve players that can do that already. Then again, even if he did, it would then be up to Sean Reid, ‘Macca’, Jordan Laidler or whoever else is playing at that time to get forward as well.

“He’s a really nice footballer, who can contribute a lot of goals. He has plenty of positions he can play in, but – again – ideally, he’d be playing off ‘Nipa’, because that’s how I’ve sold it to him and that’s where he wants to play.

“I should also say that the chairman and the executive committee have bankrolled the move, which is great – as they fully support us. I’d like to thank them for that, because they’ve put a lot of trust in me to buy players with that kind of money.”

Chairman Tony Platten added: “The executive committee is fully supporting the manager to build the best possible squad for the coming season. Having two of last season’s top three Evo-Stik Premier League goalscorers in our squad will give us the best possible chance of making good progress in the Vanarama National League North this season.”