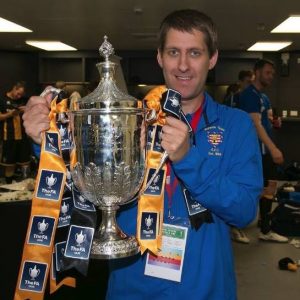 The 28-year-old head of sport for the Northumbrian radio station had also been in charge of the media output for Northern League side Morpeth Town, but will end a three-year association at Craik Park in order to help cover Spartans’ upcoming return to the National League North.

Dick – who is studying towards an NCTJ Diploma in Journalism – brings a wealth of experience to the role, including working as a media and marketing officer for the North-East Sports Academies at Tynemet College and he can’t wait to get started at Croft Park.

“I’m absolutely delighted to be joining the media team at Blyth Spartans,” Dick revealed. “it’s a fantastic opportunity for myself and one I’m relishing.

“The media setup at Blyth Spartans is second to none and that is a testament to the work and commitment Phil Castiaux and the team of volunteers have shown.”

“I can’t wait to get started, and look forward to being apart of this famous club.”

The new media manager also set out his vision for the role and admitted that he wants to continue the success that the media team enjoyed during Castiaux’s final few seasons.

Dick added: “I see my role as one to help the development of media team at Croft Park and give them the best opportunity to succeed as individuals pursue their media passions.

“However – first and foremost – we will aim to provide first class coverage of Blyth Spartans for the thousands of fans across the world, via Radio Blyth Live, BSAFCTV and our social media platforms.”