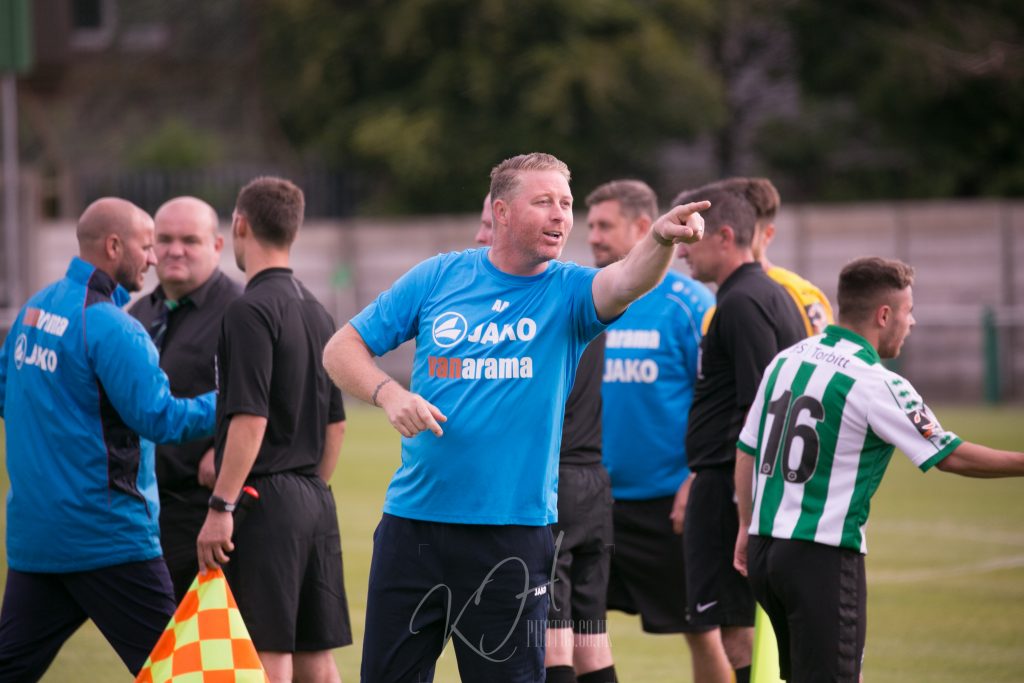 The official awarded the hosts a spot-kick when a David Ferguson cross struck the chest of Connor Oliver – Speedie taking a few seconds before awarding a baffling penalty decision that gave the Minstermen all three points.

“The official made it all about him,” commented an irate Armstrong, “I’m quite well known for being honest and that might get me in trouble – but that was never a penalty in a million years.

“He’s gone off the shout of the crowd – everyone can see that – he delayed his decision and thought about it, waited two or three seconds and he gave – it’s not a penalty.”

The 43-year-old’s frustration was compounded when Robert Dale was scythed down by Kallum Griffiths five minutes later and Speedie just waved play on – Damen Mullen then missing a golden opportunity to level.

“If that’s not a penalty on Robbie we’re not going to get one, it was a stonewaller – yet they get a ridiculous one.”

“Yes officials can have bad game – but it’s happening every single week, decisions going against us – we just aren’t getting the luck.”

Despite the result, Armstrong couldn’t have been prouder of his sides efforts.

“I can’t fault the lads, I thought every single one of them was outstanding considering they just played 48 hours ago, I’m really proud of them.

“We are playing a team that has cost a lot of money compared to the team I’ve been able to put out there – we’ve probably got a fifth of the budget York have.

“I am extremely proud even in defeat – I could have been a lot different if the referee had given our blatant penalty, and then Robbie hits the bar with a header – it’s just one of those days.”

Goalkeeper Peter Jameson was making his 50th club appearance at Bootham Crescent and produced a series of outstanding saves, and Armstrong praised his shot stopper.

“Pete’s made some great saves, but in all honesty if Pete doesn’t save them I’d be disappointed – he’s that good he makes those type of saves look routine.

“He’s going to get better and better.”

Kieran Green was sent off for a foul on Griffiths late in the first half, with York midfielder Russell Penn following soon after – and Armstrong had no qualms about those decisions.

“Greenie’s was a bad tackle, it’s a red card simple as that, and I don’t think they can have any complaints about their’s either.

“But his other decisions were baffling, and the official don’t want to listen – they tell you to talk to them, but don’t like it when your honest with them.

“I’d accept decisions like that if they came to me after and said I made a mistake – but they don’t they just blank you and are arrogant about it – he told me Connor had his arm out for the penalty, that’s a lie.”

With Green now facing a suspension, and Jamie Holmes missing for up to six week through a fractured rib, the former Ipswich Town and Middlesbrough striker admits he has to plan ahead – even during games.

“These injuries aren’t because they aren’t looking after themselves now – because they have been doing work – knee injuries, ankle injuries, fractured ribs – it’s just mad, all football related injuries rather than soft tissue – there’s nothing we can do.

“We have 7/8 first team players – proper first teamers who’d make the starting XI or definitely on the bench are not available – and in non league you can’t succeed with that – especially us and the budget we have.”