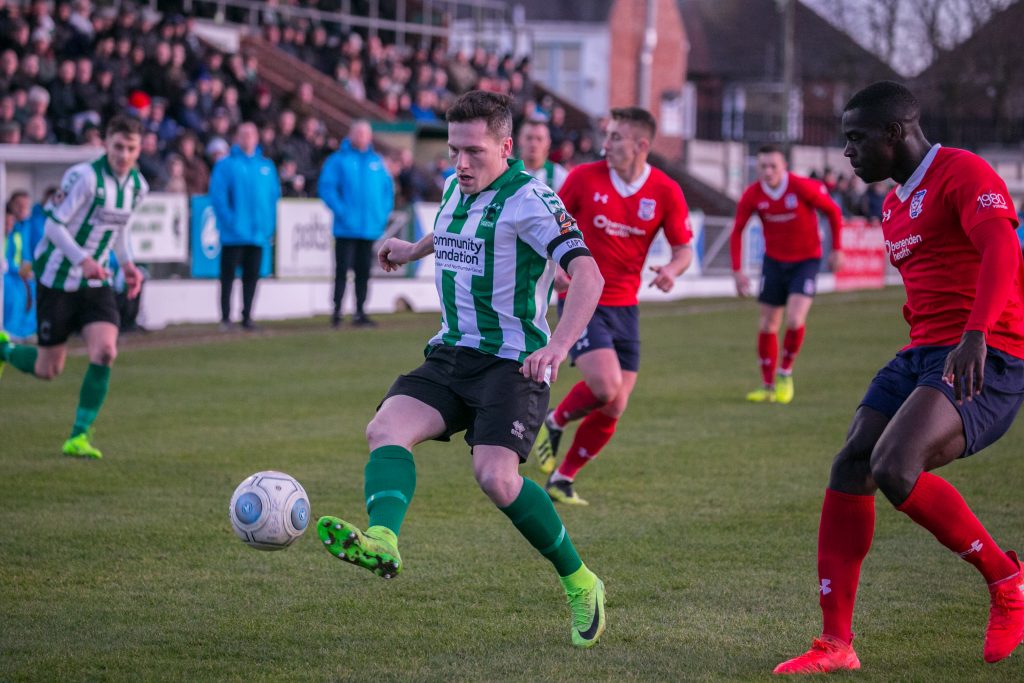 Dan Maguire’s 150th goal for the club ensured a cupset as Blyth Spartans overcame Boreham Wood of the National League to advance to the last 16 of the Buildbase FA Trophy.

Maguire’s pirouette, after controlling a wonderfully executed through ball by Connor Oliver, led to a stunning finish from an acute angle in the 26th minute.

The visitors registered just one shot on target afternoon, a comfortable save for Peter Jameson from a 61st minute corner the only time he was called into action.

Alun Armstrong made three changes to the side that drew 1-1 with Alfreton last Saturday, Alex Nicholson, Kieran Green and Sean Reid returning to the fold.

Blyth got the first chance of the game in the 4th minute when Dale played a ball through to Maguire with the outside of his foot. Maguire then controlled the ball, moved it onto his left foot and had a strike at goal that went wide of the far post.

In the 20th minute, Boreham Wood got their first chance when Kanu whipped in a cross on the turn, Shaibu went up for the header but Jameson managed to punch it away as far as Ricketts who had a strike from outside the box that went over the bar.

Blyth looked most likely to score in the game and in the 22nd minute, they got another chance to score as Watson took a throw in and found Oliver who played a great through ball to Maguire but Maguire’s shot at goal was straight at Burbidge.

Maguire looked destined to score his 150th goal in a Blyth shirt and he finally got it in the 26th minute when he got on the end of a great ball by Oliver, turned the defender and smashed it past Burbidge to give Spartans the lead.

In the 40th minute, Blyth had an excellent chance to double their lead when Dale whipped in a cross that ended up at the feet of Holmes, who smashed his shot against the side netting.

Chances were rare in the opening minutes of the second half with the best chance coming the 58th minute when Dale had an audacious effort about 10 yards into the opposition half that went well wide.

Boreham Wood could’ve equalised in the 63rd minute when Woodards got his head on the end of a corner by Thomas but his header was saved by Jameson.

Holmes had an effort at goal in the 64th minute, he got the ball onto his right foot outside the box and had a strike that went over the bar.

In the 70th minute, Oliver had a powerful strike at goal that tested Burbidge who saved the shot but had to gather the ball as it rebounded off him.

Blyth continued to put pressure on the Boreham Wood goal as some great quick passing between Rivers and Holmes ended in a shot from Rivers that Burbidge managed to save.

Blyth got the last opportunity of the game in the 90th minute when Liddle went on a run, dribbled past several Boreham Wood players then passed it to Holmes who’s shot at goal went wide of the far post.

This victory for Blyth means that Spartans will be in the Last 16 of the FA trophy. It’s back to league action though next week as Blyth travel to Bradford and face Bradford Park Avenue on the 19th January.

Man of the Match – Nathan Buddle