Before Saturday’s 3-0 win over Brackley Town in the Vanarama National League North, we once again welcomed guests associated with the fantastic FA Cup run of the 1977/78 season when Spartans reached the Fifth Round proper of the competition.

Ron Guthrie was an insurance company rep in 1977/78 and he played in every game of the cup run.Having been in the Sunderland team that beat Leeds Utd to win the FA Cup in 1973 his experience proved invaluable as our cup run progressed. Ron started his career at Newcastle Utd in 1963 as a 19-year-old. A tough tackling left back he played 68 times for United before being transferred to Sunderland in 1973.

Had the Sunderland fans taken to this ex-Magpie? “Yes, I always got on well with Sunderland fans,” Ron said. “In those days supporters would watch Newcastle one week and Sunderland the next. There was no hatred like today.”

He made 81 appearances for Sunderland gaining further European experience playing in the Cup Winners Cup, having played in the Inter-Cities Fairs Cup with Newcastle against the likes of Porto and Real Zaragoza. He was released in June 1975 and joined NPL Gateshead playing a season before leaving for a spell in South Africa.

Ron commented: “Malcom McDonald had been out there the previous season and Tommy Cassidy rang me to say he was coming home and would I like to go out for three months.”

When he returned home Jackie Marks stepped in quickly to sign him up, “I used to watch Blyth on Tuesday nights in the 1960s with the likes of Brian Slane and Eddie Alder playing for them plus I was 32 so it seemed a good fit, “said Ron.

Speaking of his time at Croft Park Ron said: “I really enjoyed it. Of course, we were robbed at Wrexham and the penalty they won in the replay was never on. I got a £25 cheque from Jackie Milburn for being Man of the Match in that game. I scored earlier in the run against Crook. I hit it like a golf chip. It was a good goal – at least I liked it anyway!

“At Newcastle and Sunderland, they had a bottle of whisky on the table in the dressing room before games so the lads could have a sip to warm up. I suggested this to Jack Marks and it might have been the Stoke game where the Spartans started that. I remember Jack on the pitch in the warm up at Wrexham with a bottle tucked under his coat!”

Ron played on at Blyth for another three years after the cup run, retiring in 1981.

Dave was spotted playing for Montague and North Fenham Boys Club by Joe Harvey’s Newcastle United and signed for them as a professional.

He had previously turned down Burnley, Bolton and Hull City. He was the backup goalkeeper in United’s 1969 Fairs Cup success but was released by Newcastle at the end of that season and was signed by Doncaster Rovers’ manager Lawrie McMenemy.

Following a bad injury Dave went on loan to Darlington. He turned semi-professional at South Shields; a club which folded and re-emerged as Gateshead. It was from there that Dave signed for the Spartans in the summer of 1977 on the same day as Terry Johnson, just as both of them had also signed for Newcastle on the same day!

“I had 11 years at Croft Park and played over 400 games,” Dave commented. “I really enjoyed it at Blyth. Those were probably my happiest days in football. It was a smashing club. In fact I nearly didn’t sign but a pal of mine said Blyth was a great club. It turned out to be the best move I made. The highlight was obviously the FA Cup run but winning five Leagues titles in a row was brilliant too.”

Dave picked up 16 England non-league team caps. “I was the England number one for six years,” he said. “We played in end-of-season tournaments against Scotland, Holland and Italy. I also played for the Rothmans National X1 and in a tournament in Tenerife was in the same side as Bobby Charlton.”

Dave was a character in the dressing room with boss Brian Slane commenting: “He was a great lad to have around to keep the lads’ spirits up.”

Dave took over the reins at Croft Park following the sacking of Jim Pearson. Dave commented: “It wasn’t a successful time. I was a player one minute and the manager the next. That doesn’t work.”

He did, however, find success at Alnwick Town as assistant to fellow Spartan Mick Dagless before going to to play for them and become manger there after Dagless left. 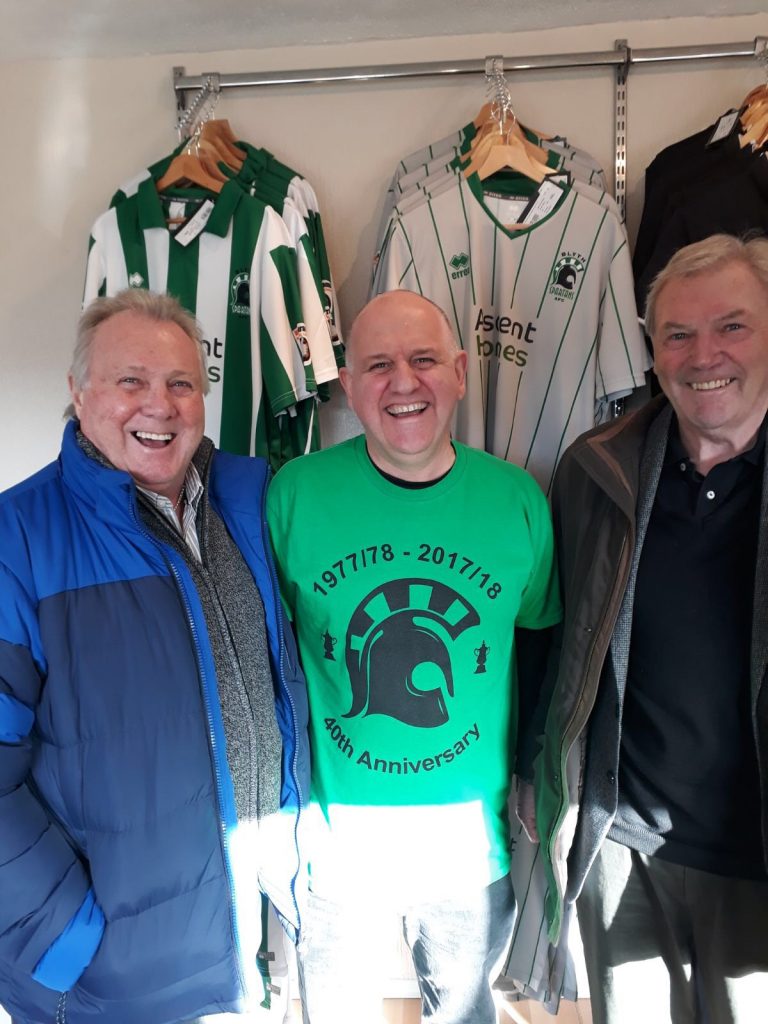